Rapidan Baptist Camp is situated in the rolling hills of Madison County, Virginia.  The story of our camp is rich in the blessings of God.

Dr. E. Wayne Thompson shared the history of the camp in an interview with Brent Hockema.

The “Camp” began in 1962 when churches came together because they wanted Christian camping. The idea of “Christian Camping” originated with Ed Bradley at Mt. Carmel Baptist Church in Luray, VA, and Ed Carmichael at Bethel Baptist Church in Great Falls, VA. These churches, along with others, originally rented property in the Shenandoah National Park at Powell’s Fort and operated under the name “Baptist Youth Camp, Inc.” This arrangement worked well for a few years until there were fears of government intervention in the camping procedures. The slogan for the Camp was “saved, studying, serving.” The camp operated on “a hand-to-mouth existence, that is, God’s hand to our mouth,” and we still live that way.[1]

Churches provided the counselors for their week of camp.  Even the pastors of the particular churches were involved in counseling their young people. Most of the churches still provide their counselors.

In 1972, Mr. and Mrs. Cullen Rast, Sr. decided they wanted their 210 acre farm to be used for a purpose of eternal value. The property meandered along the scenic Rapidan River and has a peaceful three acre pond down in the valley. The Rast’s knew that Baptist Youth Camp, Inc was looking for private property, so they sold the property to the Adelphi Bible Church in Adelphi, Maryland to be used for the camp. Adelphi Bible Church supplied the initial Board and Pastor Paul Kendle was the first Director.

The goal for occupancy as a camp was the summer of 1974. The Rasts continued to live on the property in their house on Jacks Shop Road. The Rasts had farmed the land for vegetables and cattle, and they included 15 head of cattle and some farm equipment in the sale. Vegetables were grown and cattle was raised for meat to feed the campers in those first few years. 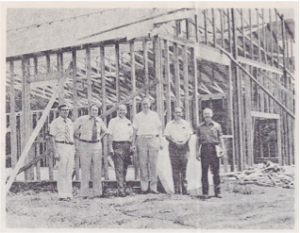 Volunteers from churches planned a day, days, or a week of work through the summer of 1976 with the goal to open the following summer.  Eight t-shaped cabins were built to house twenty-four campers and four sponsors each: four cabins for the girls and four cabins for the boys, and a bathhouse on each side of camp. There was great disappointment with not being ready to open, but in that following year, volunteers again came together and the lodge was erected for a kitchen and assembly area. (The lodge is now named Kendle Hall, after the first director.  [Paul Kendle is the tall man standing next to Dr. Wayne Thompson, 3rd and 4th respectively from the right.])

After another summer (1977) of sacrificial labor, Baptist Youth Camp finally opened its doors, on its own property, in the summer of 1978! There were 44 teens at the first teen camp on the new property, and in the weeks of camp, 16 young people came to call upon Christ for salvation, and 22 young people made a decision to dedicate their lives to serve the Lord.

Ray De Bord was the first Director of Maintenance for the camp. Ray and Helen sold their house in Maryland and used the proceeds to build the large house on the property, which is now “the Director’s house.” Ray retired from his position in April, 1982.

In 1987, the initial bonds that were sold to purchase the property were coming due, so to pay off the bonds, Dr. Thompson purchased the 52 acres across the road from the camp along the river to help pay off the bonds. Camp Rapidan now consists of 158 acres. The name of the camp was officially changed in 1987 to Rapidan Baptist Camp and Conference Center. The remainder of the bonds were paid off by the 1988 timber sale.

In a private accident of November 2002, a fire claimed one of the girl’s cabins, and two nice log cabins have been built to replace it.

Men who have served as Director are Paul Kendle, Jonathan Thompson, David Thompson, Matthew Speck, Kevin Carlock, and Kelly Earles. We remember the loss of “Johnny” Thompson, as he died on the property in a vehicular accident on a stormy and slick evening in the first year of his leadership. There has been much personal sacrifice on the part of our directors through the years, as they surrendered to serve the Lord in this capacity. We are thankful for each one.

Through the years, different activities have been added to provide greater opportunity for campers’ enjoyment: walking/biking trails; canoes; paddleboats; rowboats; a game room; outdoor basketball court with 8’ and 10’ rims; the 400’ Rapidan Rail; a large swimming pool with a 250’ waterslide; shooting ranges for archery, slingshot, and air rifle; a low ropes course; a gyroscope; a 63’ tower for the 1490’ zipline,  a 50’ climbing wall, and a 63’ drop zone. The Rapidan Rail is a signature coaster ride down 400’ of DOT guardrail, on a cart at about 30 miles per hour, into a sand pit at the bottom!

Our desire is that God would continue to bless the camp with more disciples of Christ and create a vision in the heart of others for Christian camping; that they would then support the work here and continue the vision begun in 1972.

Rapidan Baptist Camp is a gem in the hills of Virginia, and maybe in your own “backyard,” where you can come away to escape the rush of everyday life, to hear the Word of God expounded and preached exalting the Lord Jesus, evangelizing the lost, and equipping the saints to return to the work of the ministry in your own hometown.

Come be a part of the great work of God here at Rapidan Baptist Camp!